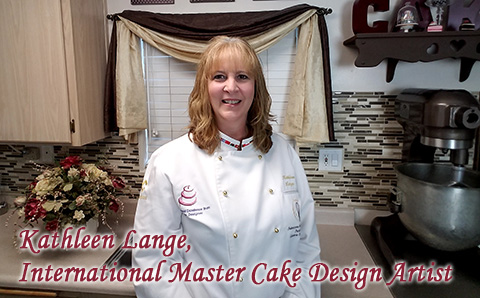 Kathleen’s love of baking and cake decorating started when she was old enough to remember helping her mother bake and her parents bought an “Easy Bake Oven” for her when she was 4.  Kathleen enrolled in her first Wilton Cake Decorating Classes Spring of 1980, at the age of 15.  She sold her first wedding cake at the age of 16 and studied and mastered the intricate art of cake decorating and designs ever since she attended her very first class.  She was hooked!

Kathleen loved “Sugar Art” from the very beginning and was invited to her first Wilton Cake Decorating Teaching Seminar, in the fall of 1980, at the age of 16; she was the youngest Wilton Teacher at the time.  Kathleen received several Wilton Incentive and Territorial Awards, and was inducted into the Wilton Method Teacher’s Hall of Fame, The President’s Club and Imperial Club in recognition of her 21 years of teaching several thousand students; last count over 10,000 + students.

Kathleen has  more than one greatest achievement; I’m beyond words to be recognized for doing something I absolutely love!

What does sugar artistry mean to me as an instructor?

Sugar artistry is my life.  A passion within, since I was age 3; when I first received an Easy Bake Oven for Christmas. Sugar artistry and cake decorating to me, is an art that uses food coloring and frosting as paint, tips for the brushes and cake as the canvas.  Sugar art allows me to incorporate gourmet flair, imagination, and creativity in an edible art form.

Commit to the LORD whatever you do, and your plans will succeed.  Proverbs 16:3