I thought you would enjoy a little bit of Cake History:) Great information for all my students/followers. I’m all about the history and sharing. Click on the following link for a full history lesson on cake. Enjoy!

The history of cake dates back to ancient times. The first cakes were very different from what we eat today. They were more bread-like and sweetened with honey …
‎About cake – ‎cake symbolism – ‎cake mixes – ‎high altitude cake mix 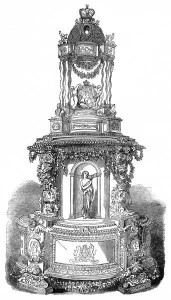 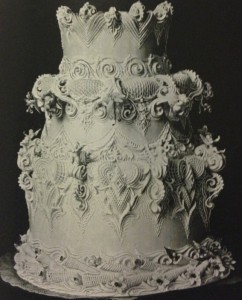 It is very difficult to put an exact date on when baking, cake making and decorating began, although it is thought that the Babylonian’s taught the Egyptians the art of baking. A painted panel of around 1175 BC, depicted the court bakery of Ramesses III, illustrates the preparation of several types of cakes, as well some bread. There are also indications that confectionery sweetened with sugar was on sale in Egypt around 700 BC.

Today we serve specially decorated cakes to celebrate many different occasions: weddings, christenings, engagements, anniversaries, birthdays and Christmas. Christmas cakes have a long history and were baked by the rich in the eighteenth century as Twelfth Night cakes. A bean and a pea would be hidden and baked in the rich fruit mixture. Whoever found the bean was crowned ‘king of the feast’ and the finder of the pea ‘queen of the feast’. But it is wedding cakes that have the longest tradition and the story of their changing development the best illustrates the history of cake decorating as an art.

The tradition of creating special cakes for weddings reaches back to Roman times. A small and basic fruit cake would be made from food that was traditionally offered as an appeasement to the gods – rich fruit, nuts and tiny honey cakes. This cake would be crumbled over the bride’s head so that the gods would bless her with abundance – the tradition known as ‘crowning the bride’.

The tradition was brought to Britain by Julius Caesar in 54 BC and became part of local custom. At first, it was only wealthy families who could afford to adopt the practice, with poorer families scattering grains of wheat or corn over the bride, in the hope for fertility.

Crowning the bride continued until a mere 200 years ago. Now the ritual has been split into two parts – rice or confetti is thrown over the bride to encourage fertility and each guest is given a slice of cake to eat or take home (girls were supposed to sleep with a slice of cake under their pillows to induce dreams of future husbands).

Although they were not yet served at weddings, decorated cakes made their first appearance in England during the reign of Elizabeth I. Most were adorned or molded almond paste. The food of this era was becoming exotic and extravagant, with new the new culinary discoveries brought back from around the empire. Sweetmeats were served in dishes molded from a form of pastillage. Extraordinary banquet centerpieces were brought out to amaze and delight noble guests.

At this stage, wedding cakes were baked as tiny separate cakes, more like buns with a sticky coating of almond paste. Some would be crumbled over the bride, some squeezed through her wedding ring, some eaten by guests and some thrown to the poor folk outside the feast. The remainder were built into a pile and set before the new husband and wife, who were expected to kiss over the pile of cakes. This would hopefully bless them with prosperity and many children. It would not be long before this unruly pile of sticky almond paste-covered buns would be converted into one large cake.

When Charles II returned from exile in France to reclaim the English throne in 1660, he brought with him a love of French cooking and some of his favorite French pastry chefs. It was these men who, finding the piles of almond buns unappetizing and unattractive to their trained eyes, suggested they should be iced with a crust of sugar and then adorned with trinkets.

Once the idea of decorating the cake with trinkets had been embraced, there was a rush by all the great chefs of Europe to create more fantastical decorations. Competition was enormous, with every chef wanting to create something fit for the king’s table. Sugar sculpting began in Italy in the seventeenth century: Giovanni Lorenzo Bernini used sugar to create works of art for special occasions. However, not until the 1760s were all the constituents of our present-day celebration cakes put together. The first edition of Mrs Raffald’s book The Experienced English Housekeeper (1769) contains three successive recipes for a rich cake, marzipan and icing.

The most celebrated confectioner of this time was Antoine Carème. His book Patisserie Royal is illustrated with engravings showing that he used a form of pastillage for his highly structured cakes and desserts. It is he who likened the art of the confectioner to that of the architect and, in fact, took many of his ideas from architectural drawings. A similar recipe for pastillage was given in the book The Complete Confectioner by Frederick Nutt, published in 1819.

In 1894 Ernest Schulbe first competed at the London Exhibition. He remarks in his book, Advanced Piping and Modelling, that at this time very little ‘net or string work’, as he described it, was done in Britain. Schulbe’s book shows us that the modelling tools we know today were in use in the late nineteenth century, though made of bone rather than plastic. Flowers were modelled in a similar fashion, including the use of stamens. The paste used was a mixture of marzipan and gum paste. Brass crimpers, very similar to those on sale today, were also used.

Even after it became common practice to ice wedding cakes with sugar in the late seventeenth century, the cake would still be crumbled on the bride’s head… the icing, in fact, making the ritual easier. The sugar would crumble and could be showered over the bride whilst the rest of the cake was left to be eaten.

Eventually, the bride’s family began to prepare two cakes for the feast: one for the crowning and one highly decorated creation to appeal to those who had discovered a taste for sugar icing. These became known as the bride’s and the groom’s cakes.

The tradition of crowning the bride continued until just before the reign of Victoria and it was then that the ‘groom’s cake’, a dark fruit cake, was cut into pieces to be taken home by the guests. The ‘bride’s cake’ (made from a lighter mixture but more highly decorated) would be served as a dessert at the wedding feast.

Today’s cakes can be eight feet high and covered in flowers, fountains of champagne, figures of the bride and groom or whatever else they fancy.

Since the early twentieth century, cakes have been raised in layers on pillars. Originally it was only royalty and high society who could afford these tiered cakes, with the rest of the country having single cakes decorated with perhaps a vase to add height to the display. The three-tiered round cake became traditional, representing the three rings – the engagement, wedding and eternity rings.

Soon the request for a three-tiered cake became fashionable among the style-conscious middle classes, even if there was more cake than was actually needed for the guests. Consequently, there was often a tier left over and, rather than use it immediately, it would be kept for the christening of the couple’s first child (which would normally be within 12 months of the marriage).

Very little was published on cake decorating between the two World Wars. The Second World War, with its severe sugar rationing in the United Kingdom, reduced the number of books being published on the subject still further and icing practice became very difficult. Mashed potato was used to keep piping skills honed. One pound of icing would be used for a whole cake decorating class, for weeks at a time.

Although there were sugar restrictions in the colonies of the War, they were not quite as stringent as in the United Kingdom. Sugarpaste was the preferred covering of rich fruit cakes in countries like Australia and South Africa. But, in Britain, the master bakers continued with their favorite technique – royal icing. Ronnie Rock, one of the greatest craftsmen in his field, actually ground his own icing sugar to produce the magnificent piece he made for his first post-war exhibition in 1946. It is now displayed in London’s National Bakery School.

The custom of the bride and groom cutting the cake together began in the 1930s when British cakes were encased in several layers. Grooms would ‘help’ the bride cut the cake, using a sword or knife. In those days this would have been unfailing a large hard white cake with some piped decoration. It would perhaps have been decorated with horseshoes (for good luck) and tiny bride’s shoes (representing the giving away of the bride to the groom by her father and the idea of a possession – historically a shoe left on a piece of land symbolized by ownership).

In the last thirty years, there have been many changes in the fashion for wedding cakes. Soft sugarpaste icing became popular and with it the creation of new techniques taken from needlework, such as smocking and ribbon insertion. Sugarpaste is often imagined to be a modern invention but, in fact, the first recipe for sugarpaste was published in 1609 in a book entitled Delights for Ladies. This paste was made from ‘fine white sugar, starch and gum tragacanth’, colored and flavored with pounded flowers.

It is this movement in trends for the decoration of wedding cakes that set the fashions for styles of christening, birthday and anniversary cakes. Today we realize that with imagination and practice, almost anything is achievable.

In 1976, the International Cake Exploration Societé (ICES) was founded in Monroe, Michigan, at the National EXPO Cake Show sponsored by Betty Jo Steinman. ICES was founded on the basis of cake decorators sharing and caring for their craft. Each year ICES holds its annual Convention and Sugar Art Show in a different location in the United States. At our Annual Convention and Show our members will find incredible cakes and sugar art displays as well as demonstrations and hands on classes 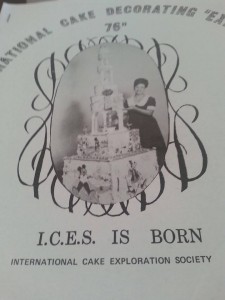 International Cake Exploration Societe (ICES) honors cake decorators who have contributed significantly to this art form by inducting them into the Hall of Fame. Individuals can only be nominated by the membership for this honor.